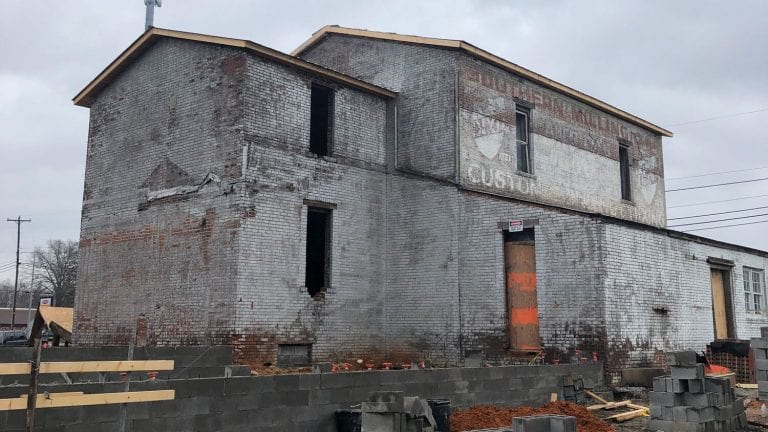 March 10, 2020: UPDATE: Blake Stoker from Blake’s BBQ provided some additional photos as well as video in our ongoing series of updates on the progress of his forthcoming brick and mortar location. Additionally, we asked how progress was going. He advised, “Actual construction should be finishing up in the September range. with hopeful opening in November-January range.” That’s exciting. Looks like before we know it we’ll be able to walk into a stand-alone Blake’s BBQ restaurant. He continued, ” Foundation of the added-on patio area on north side is really taking shape as well as the pit room, loading dock area in back, and some internal structural work on bathrooms, etc.” Since right now we can visit his trailer for a Wednesday through Saturday(from 11AM til sold out), we checked in on the current menu. Blake explained, “Mom has REALLY REALLY elevated our sides and desserts game since coming on to work full time in October with new homemade sides/desserts each week and nearly daily specials in both categories. Also, we’ve started having BBQ stuffed potatoes most Wednesday’s as our special and we are doing creative sandwiches such as a smoked turkey on sourdough with a house-made cranberry compote and the “Bubba Cole” which is and Turkey, Brisket and Pimento Cheese on brioche bun throughout the week.” Sounds incredible. He finished with, “We are trying to be creative, while executing to our very best each day. Consistency is key and customer service our biggest priority.”

February 21, 2020: UPDATE – As we move forward through 2020, we have been lucky to get some new video and photos from Blake Stokerat his future brick and mortar. He filmed some of the construction progress and took some exterior photos. BONUS is a ridiculously amazing photo of some ribs.

Blake’s BBQ in Martin, Tennessee should be on your radar if it isn’t already. Follow them on Instagram or Facebook and if you’re headed to Nashville or Memphis you need to take a short road trip(roughly 2 1/2 hours from either city) to try his central Texas inspired barbecue available Wednesdays through Saturday from 11AM until sold out(and yes, they sell out daily so arrive earlier than later).

They are currently serving out a trailer, but the pictures above and below are of the new brick and mortar location where construction has started per owner Blake Stoker. They are looking at roughly a 12-14 month lead time and are shooting for a spring 2021 opening. Blake explains,

“They started construction/remodel the first week of October. First, they removed the existing lean-to shed on the north side of the building that will eventually become our climate controlled/indoor patio. There will be a seating area with “garage door like” windows all around (also where the entrance into the restaurant will be). The crew began gutting the interior of the building and replaced the roof with galvanized metal roofing. While doing so, they removed 6 large grain bin structures that protruded through the second floor (down into the first floor from the ceiling, about 10 feet overhead).

We are keeping those and plan to reimplement them back into the building where they were to keep the original feel of the building. Since then, they’ve been laying the block footing around the exterior of the porches/patio areas on both sides of the building, as well as in the back where an expansion is being made for kitchen/back of house area and pitroom. (Preparing to pour concrete).”